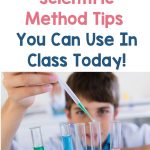 Do your students struggle with all things scientific method? Let me share some quick and easy scientific method tips and tricks that have helped my students to feel more confident as they identify variables, write hypotheses, create graphs, and write conclusions.

Independent, dependent, constants….oh my! I remember struggling with identifying variables as a student. It can be so confusing!

In sixth grade, I teach my students to write a simple hypothesis using an if/then statement.

Why use an if/then statement?

Using an if/then statement helps them to be sure that their hypothesis includes both an independent and dependent variable!

Once students can easily identify the independent and dependent variables, I give them the formula:

If IV, then DV

I like to use non-scientific examples to help students hear the causal relationship between the IV and DV in the hypothesis. I usually state the first part and let them complete the rest.

I like to make a game of a bunch of examples like the ones above. They get the concept really quickly!

“What goes on the x-axis?” It’s the never ending question when creating a graph after a scientific method lab!!!

I like to have students trace a hand in their notes and label where the independent and dependent variables go, like the pictures below!

If you’re looking for resources to help students with graphing, check out this post:

5 Easy Tips to Make a Graph in Science.

It’s no secret that I’m a huge fan of using claim, evidence, and reasoning to help students build scientific writing and thinking skills!

One of my favorite places to practice CER is the conclusion paragraph for the scientific.

Claim, evidence, and reasoning is an amazing way to check and see if they really grasped the concept the lab was teaching – if not, they were just having a really good time playing in the classroom!

Why use the CER as a conclusion?

If you’re interested in learning more about using CER to improve student’s scientific thinking and writing skills, take a look at this blog post!

Ready to get started with CER and the Scientific Method? This no-prep bundle saves you valuable time and includes differentiation for a variety of levels!

“This resource was very helpful in teaching my students CER. I did it with my 6th grade and I found it very easy to use. They were engaged and really enjoyed the videos. I think it was a great way to teach them about this difficult topic. I am doing the M&M activity tomorrow and I know they will love that too. So glad I bought this bundle!” – Tina

Are you a busy science teacher?

Let me help! First, I'll send you the FREE resource library password. Then get weekly updates with new strategies and resources for your busy science classroom! Best of all, I'll notify you when new products are released because they're always 50% off for 48 hours!

Welcome to Beakers and Ink! My name is Carrie and I am a middle school science teacher and former special education teacher. My passion is helping science teachers to provide their students with high quality, engaging resources. I want to save you time so that you can live your best life – both in and out of the classroom!

Help your students improve their writing and scientific reasoning with claim, evidence, and reasoning! This free 7 page guide to writing C-E-R is filled with graphic organizers, sentence stems, and tips to help struggling writers!